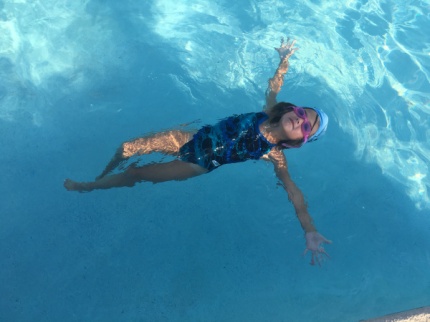 My six-year-old daughter is a strong-willed, stubborn soul. She’s feisty, yet shy. I love to watch her, as she wavers between boldly overconfident and timidly insecure, trying to make her way in the world. I learn so much from her; her light-bulb moments are mine as well.

This summer, she’s on swim team. I love my kid, but swimmer she is not. If she were a fish, natural selection would’ve taken care of her long ago. (Think goldfish floating at the top of the tank).

However, in her mind, she thinks she is the ultimate swimming machine. She imagines herself as the Michael Phelps of the neighborhood, bringing home the blue ribbons and victories like only an Olympic champion could.

Reality is, however, a different ball of wax. Let me paint a picture for you: Swim Meet. Balmy summer night. A small, skinny child, half “swimming” and half doggy-paddling across the length of the pool. She stops halfway to gasp for air, as my husband watches from the sidelines, preparing to jump in and perform CPR if needed. The sun sets, night begins to fall, and then she finally makes it to the other side of the pool.

She exits the pool, winded but smiling from ear to ear. By this time, her competitors have already dried themselves off with their towels and are relaxing on the sidelines.

I run to her side, patting her on the back and telling her she did a good job. “I won, Mommy!,” she exclaims. “I came in first place.”

“Uh huh, yes,” I say, with a patronizing nod and overly-bright smile. I follow this up with, “Did you feel like you were going to die out there?”

“Kind of,” she nods. “But I won!” She takes off, confident in her hard-won victory and on the prowl for some candy (because that’s what swim meets are REALLY about).

We’ve all heard the expression, “Perception is reality.” My daughter is living, breathing, swimming proof of this expression. The girl comes in last by a mile, but she envisions herself as the winner. She declares herself the winner; she feels the victory within her soul. And so she is the winner.

Can you imagine a grown up doing this? Debbie loses the tennis match, but she proclaims herself the winner anyway, despite the rolling eyes of her competitors. Joe comes in last in sales for the company, but nonetheless does a (very awkward) victory dance around the office. We would call these people delusional.

I’m not advocating for delusions of grandeur, but my daughter is on to something (although a layer of humility would be useful). What would happen if we imagined ourselves as the best, if we labelled ourselves as the winner no matter the outcome? What if we decided to just do our best and call that success? As long as we’re dipping our feet in the water and living our lives with intention and heart, we’re winning!

If perception is reality, let’s perceive ourselves as the righteous, beautiful, capable, talented, worthy, smart, and hilariously imperfect humans that we are. Why not? Like my little fish, jump out of that pool, smile ear-to-ear like the winner you are, and do your victory dance.